Yoga refers to traditional physical and mental disciplines that originated in India. The word is associated with meditative practices in Hinduism, Buddhism and Jainism. Within Hinduism, it refers to one of the six orthodox (stika) schools of Hindu philosophy, and to the goal towards which that school directs its practices. In Jainism, yoga is the sum total of all activities – mental, verbal and physical.

Major branches of yoga in Hindu philosophy include Raja Yoga, Karma Yoga, Jnana Yoga, Bhakti Yoga, and Hatha Yoga. According to the authoritative Indian philosopher Sarvepalli Radhakrishnan, yoga, based on the Yoga Sutras of Patanjali, comprises one of the six main Hindu schools of philosophy (darshanas), together with Kapila’s Samkhya, Gautama’s Nyaya, Kanada’s Vaisheshika, Jaimini’s Purva Mimamsa, and Badarayana’s Uttara Mimamsa or Vedanta.Many other Hindu texts discuss aspects of yoga, including the Upanishads, the Bhagavad Gita, the Hatha Yoga Pradipika, the Shiva Samhita and various Tantras.

The Sanskrit word yoga has many meanings, and is derived from the Sanskrit root “yuj,” meaning “to control,” “to yoke” or “to unite.” Translations include “joining,” “uniting,” “union,” “conjunction,” and “means.” It is also possible that the word yoga derives from “yujir samadhau,” which means “contemplation” or “absorption.” This translation fits better with the dualist Raja Yoga because it is through contemplation that discrimination between prakrti (nature) and purusha (pure consciousness) occurs.

Someone who practices yoga or follows the yoga philosophy to a high level of attainment is called a yogi or yogini. 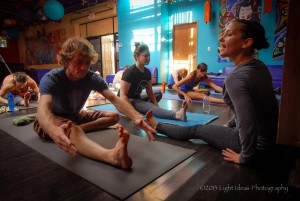