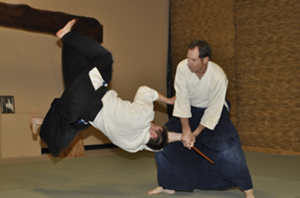 In Aikido, as in virtually all Japanese Martial Arts, there are both physical and mental aspects of training. The physical training in Aikido is diverse, covering both general physical fitness and conditioning, as well as specific techniques. Because a substantial portion of any Aikido curriculum consists of throws, the first thing most students learn is how to safely fall or roll. The specific techniques for attack include both strikes and grabs; the techniques for defense consist of throws and pins. After basic techniques are learned, students study freestyle defense against multiple opponents, and in certain styles, techniques with weapons.

Aikido is performed by blending with the motion of the attacker and redirecting the force of the attack rather than opposing it head-on. This requires very little physical strength, as the Aikidoka (Aikido practitioner) “leads” the attacker’s momentum using entering and turning movements. The techniques are completed with various throws or joint locks. Aikido can be categorized under the general umbrella of grappling arts.