Iaido is the Japanese martial art of swordsmanship which emphasizes drawing and cutting with the samurai sword (called a ‘katana’) in a single fluid motion.  An in-depth reading of the Japanese characters for iaido is: 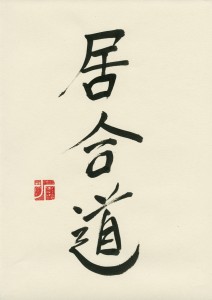 I = being / presence , AI = harmony, DO = way  — roughly, “The way of harmonizing oneself in mental presence and action”

There are many styles of swordsmanship, all of which subscribe to non combative aims; Iaido is an intrinsic form of Japanse modern budo. 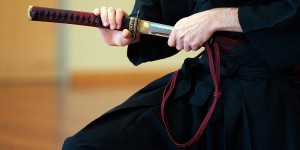 The Iaidoka (a practitioner of iaido) wields a sword: not to control the opponent, but to control himself. Iaido is mostly performed solo as a series of Waza. The Iaidoka executes various techniques against single or multiple imaginary opponents. Each Waza begins and ends with the sword sheathed. In addition to sword  technique, practitioners require imagination and concentration in order to maintain the feeling of a real fight and to keep the Kata fresh. In order to properly perform the waza, Iaidoka also learn posture and movement, grip, and swing. Iaido is never practised in a free-sparring manner.

Iaidoka practice to prepare for a surprise attack, where an immediate, efficient solution to the problem of aggression is necessary. Therefore, the technique is highly refined. Every unnecessary movement is cut away. Technique is simple and direct. The training method is aimed towards development of the practitioner’s every mental and physical resources.